HOW TO IDENTIFY AND MANAGE BLOSSOM END ROT (BER) 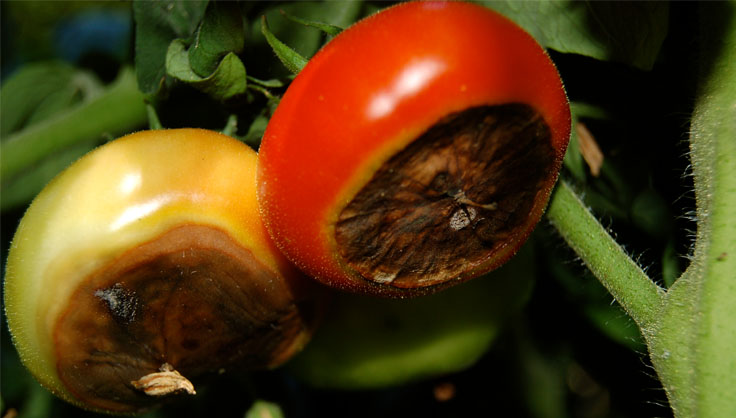 This relatively common problem is not a disease but rather a physiological disorder caused by a calcium imbalances within the plant. A water-soaked spot at the blossom end of the fruits is the classic symptom of this disorder. BER mostly affects: Tomatoes, peppers, eggplants, squash, cucumbers and water melons.

BER is most common when the growing season starts out wet and then becomes too dry prior to or during fruit setting. Damage usually appears when fruits are roughly half their full size. The water-soaked areas enlarge and turn dark brown and eventually begin to rot.

CAUSES:
Low concentration of calcium in the fruit, remember calcium is critical for normal cell growth. When demand for calcium exceeds the supply, tissues break down.

BER occurs when there are wide fluctuations of moisture which reduces uptake and movement of calcium into the plant.
Calcium deficiency during fruit formation can also be caused by too much nitrogen containing fertilizer, high salt levels in the soil, or damage to plant roots when carrying out agronomic activities.
Soil pH – either too high or too low
Cold soil – cold soils limit nutrient uptake.

IDENTIFYING BLOSSOM-END ROT DAMAGE
Usually BER occurs when the fruit is green or ripening. It starts with a small, depressed, water-soaked area on the blossom end of the fruit.

As the spot enlarges, it becomes sunken and turns black or dark leathery brown in color.

Maintain consistent levels of moisture in the soil throughout the growing season.
Prevent calcium deficiency by supplementing with calcium containing foliar fertilizers or top dress with calcium nitrate.
Maintain soil pH at optimum levels as per specific crop requirements – soil analysis is critical!
Keep records: You may notice that some crop varieties are more susceptible to blossom-end rot than others.
Avoid cultivating or hoeing near the roots of tomato plants, in other words carry out agronomic activities carefully and preferably use herbicides instead of weeding.
Avoid over-fertilizing during early fruiting, when blossom-end rot is more likely to occur.